Anthropogenic Biomes of the World, v1 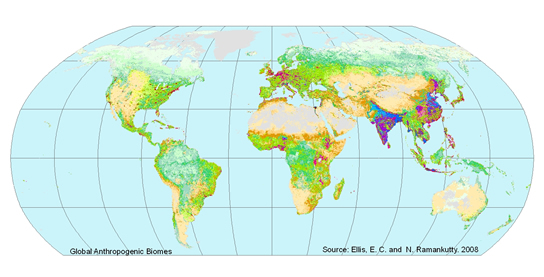 The multi-stage procedure began by first separating “anthropogenic” cells from “wild” cells based on presence of population, crops, or pastures. The anthropogenic cells were then stratified into population density classes: namely “dense”, “residential”, “populated” and “remote” based on the density of their non-urban population. Then cluster analysis was used to identify natural groupings within each of the strata identified above. Finally the clusters derived above were labeled, and organized into logical groupings, based on their populations, land-use and land-cover characteristics, and their regional distribution, yielding the 18 anthropogenic biome classes and three wild biome classes.

While the Anthropogenic Biomes of the World, v1 classes are more strongly linked to empirical analysis of global data, making them more objective, their identification cannot be made consistent across datasets (their identities are optimized to the data itself), so Anthromes v2 classification (or another similar method) is required to facilitate analysis of historical changes in the biosphere.

SEDAC would like to acknowledge Drs. Ellis and Ramankutty for providing these data for distribution. More information and original data on Anthromes are at: http://ecotope.org/anthromes/