The Gridded Population of the World (GPW) data collection was first developed in 1994 to provide a spatially-disaggregated population layer that is compatible with data sets from social, economic, and Earth science disciplines.  In the 20 years since it was first created, GPW has been substantially expanded and enhanced with each subsequent version, as seen in the table below. 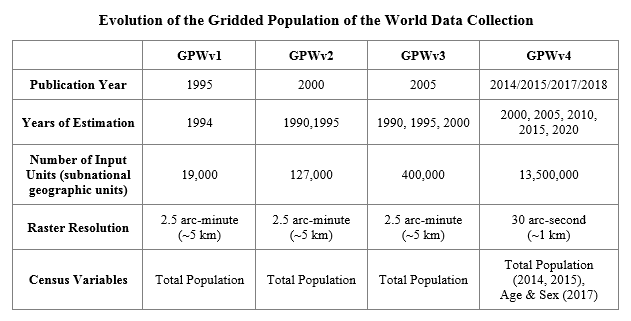 The current version of GPW, version 4 (GPWv4), provides a major update to the underlying population and spatial data and includes methodological improvements over past versions of the data collection.

Unlike previous versions of GPW that were gridded at a 2.5 arc-minute (~5 km) raster resolution, GPWv4 is now gridded at a much smaller pixel size: 30 arc-second or approximately 1 km at the equator.  This raster resolution is now standard among global gridded population data sets. By using a finer pixel resolution, GPWv4 can take advantage of the high resolution spatial data provided by many countries, resulting in a more accurate population surface.

The images below show examples of how the finer grid resolution and greater number of input census units in GPWv4 can combine to provide more detailed and precise population grids. 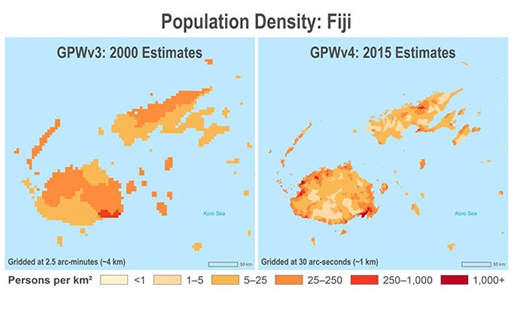 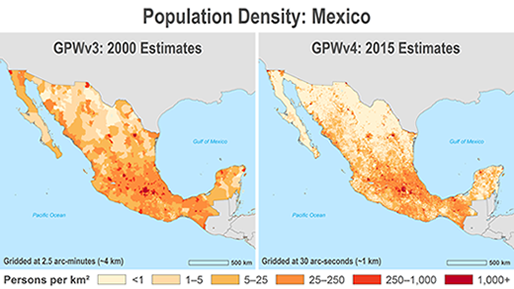