The methods used to produce the data sets in the GPWv4 collection are described in detail in the formal data collection documentation.

A description of the history of GPW and the development of version 4 is available in Doxsey-Whitfield et al. (2015):

Taking Advantage of the Improved Availability of Census Data: A First Look at the Gridded Population of the World, Version 4 (GPWv4)

GPWv4 is a minimally-modeled gridded population data collection that incorporates census population data from the 2010 round of censuses. Population estimates are created by extrapolating the raw census counts to estimates for target years 2000, 2005, 2010, 2015, and 2020. Additionally, a set of estimates that have been nationally adjusted to data from the United Nations World Population Prospects 2015 Revision (UN, 2015) is included in the GPWv4 collection for each of the target years. The development of GPWv4 builds upon previous versions of the data collection (Tobler et al., 1997; Deichmann et al., 2001; Balk et al., 2006).

The two basic inputs of GPW are non-spatial population data (i.e., tabular counts of population listed by administrative area) and spatially-explicit administrative boundary data (administrative or enumeration units). Population input data were collected at the highest resolution available from the results of the 2010 round of censuses, which occurred between 2005 and 2014. These were collected from hundreds of national statistics offices and other organizations. Where census results were unavailable or not yet released, official population estimates from national statistical offices or the United Nations were used. Administrative boundary data were collected from a variety of national agencies (e.g. statistics offices, mapping agencies, planning agencies), as well as other organizations, , such as humanitarian agencies (e.g., U.N. OCHA). Ideally, the boundaries for a given country were those originating with the census. In the absence of official census boundaries, other administrative boundary data were used. The population census counts or official estimates were then matched to digital geographic boundaries. Matching was based on the common identifying codes or the unit names used in the census.

A global framework of international boundaries was used to ensure consistent alignment between countries. The Global Administrative Areas version 2 (GADMv2; www.gadm.org) data set was selected as the framework as it is publicly available and frequently used in the research community. The international boundaries of census geography data sets were adjusted to the GADMv2 framework, although in cases where the resolution of the census geography far exceeded the GADMv2 boundaries, the former were kept (e.g., New Zealand, the United Kingdom, and the United States).

To facilitate global comparison of countries that conduct their censuses at different times, annualized growth rates were used to estimate counts for the target years of 2000, 2005, 2010, 2015, and 2020. Growth rates were calculated for each administrative unit by matching to a previous census enumeration or estimate. Annualized rates of change were calculated as follows:

Population estimates were then calculated for the target years as follows:

where Px is the population estimate in the target year x, and P2,  r and t are as defined above.

For some countries, it was not possible to match at the highest resolution between the two points in time. For these countries, censuses were matched and growth rates were calculated at a coarser resolution (e.g., state), and applied to each nested higher resolution unit (e.g., county). In some cases we adopted a hybrid approach, matching the highest resolution where possible and coarsening where needed. The 2010 population estimates were then extrapolated to 2000, 2005, 2015, and 2020 using the calculated annualized growth rates.

Adjustment factors for matching national estimates to UN estimates are calculated as follows:

Adjustment factors were applied at the sub-national level as follows:

where Padj is the sub-national UNWPP-adjusted estimate, and Px and a are as defined above.

In order to achieve full global coverage of cross-tabulated age by sex population count estimates, it was necessary to consult a variety of source data. These data are predominantly census based and at the same geographic scale as the total population count data. There are, however, a number of countries for which cross-tabulated variables were only available from alternative sources or at coarser geographic scales.

The estimation of the demographic variables, age and sex, was accomplished through the following procedure.

First, if single-year age data were available for a given country, the data were aggregated into 5-year age groups.

where P is the 2010 estimated population, c is the census population, and the subscripts m, f, and t refer to male, female, and total, respectively.

where the subscript i refers to any age group in the set of all age groups, and P, c, m, and f are as defined above.

Finally, the corresponding male and female age groups were summed to produce the estimated total population in that age group for year 2010:

To create the raster population data sets, the population estimates were distributed to a 30 arc-second (~1 km at the equator) grid using an areal-weighting method. This method, also known as uniform distribution or proportional allocation, does not make use of any other geographic data in order to spatially disaggregate the census population. Population was allocated to the raster pixels (i.e., grid cells) through the simple assumption that the population of a pixel is the exclusive function of the land area within that pixel. For pixels that intersect sub-national or national boundaries, population was allocated based on the proportion of the area. A water mask was applied to the data to prevent lakes, rivers, and ice-covered areas from distorting the actual population distribution. 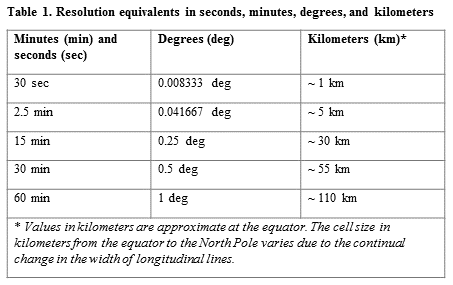